Ardus : restored  book is a visual novel simulation game where the player gets to take over an ol rundown library from a distant relative and recreate a community spot for the inhabitants of the village.

Every choice you decide is purposeful, and effects the gameplay .

The main character's default is to help the community, but with your choices can change and either help the  community or for business though actions you take.

Get to know npcs to better help them or find the easiet way to exploit them for more money.

loud music, please turn it down, I couldnt find the option!

Though it's clear that this is still a very early demo, I have to admit that I'm intrigued! The premise almost feels like those puzzle-based/clicker mobile games that often having renovating a house/garden as the goal, but with more of a simulation aspect; while it's still mostly theoretical, the demo succeeds in showing where it's going and I'm looking forward to see what an expanded library system will look like! The promise of getting to renovate and expand as you go, including buying new furnishings, is something I like the sound of, and the visual novel aspect promises more in-depth character interaction than most puzzle-heavy/sim-heavy/clicker games allow. Though only a few characters currently exist in the demo they already have personalities and I'm interested in learning more about this world, especially about Suda since her worship apparently features heavily in it.

I did notice that the MC is female only after you're asked to input your name because I used a male name and was subsequently referred to as female (first as a seamstress, then as a niece in the letter). There wasn't any indication that the MC is meant to be female until then so adding it to the gamepage summary or earlier in the prologue might make it more obvious. The game also refers to the MC by the default name before later asking for name input, which feels a little odd and might also benefit from reworking, but the demo does succeed in creating the beginnings of a strong atmosphere and similarly strong characters who I suspect will drive a lot of the game. Overall I enjoyed this brief, early foray into community-based library restoration and am looking forward to seeing more! 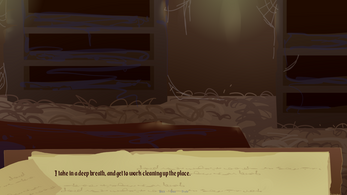 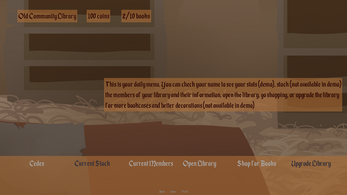 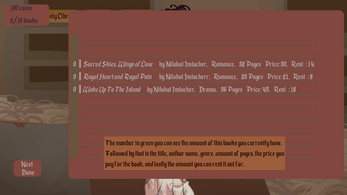 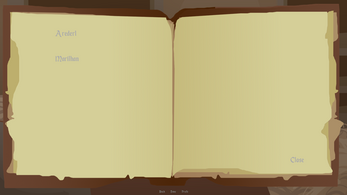 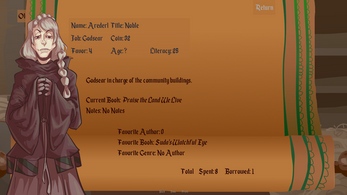 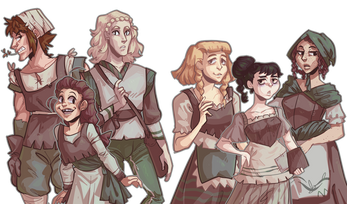